I think I finally got the electronics sorted for Mirror Smasher.

I knew from the beginning that the pianists would need a click track, and that I’d rather pre-record the electronic part than do any live processing. In the spirit of the piece (breaking up material into small fragments), the first set of electronics is a whole bunch of delays and beat slicing.

Ableton Live has this awesome built in plugin called Beat Repeat. It essentially samples a small fragment of music – a beat, for instance – and then repeats it along whatever rhythmic grid you set. You can also set it to blend in with the original input sound, or to supersede it. There’s also a setting to mute the input and only hear what comes through the effect. That’s incredibly convenient in this situation, as I can record the piano part, then switch the plugin to this mode (called gate), and record the plug in’s output to a separate track. 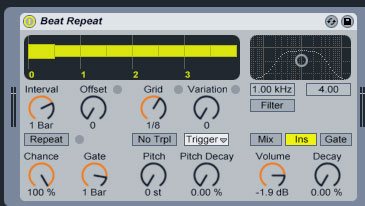 The result of this is that I get a track of just the effect, so that the pianists can play the part live and – using a click – the effect will be perfectly in time with what they’re doing.

Next up in the joy of this plug in is its options to run itself aleatorically. There are configurable settings for both chance – the chance that the plugin turns on and catches a sample at any given moment – and for variation in grid size, so the effect can change randomly between 16ths, 32nds, eighths, quarters, and so on (triplets of each too).

I essentially used a ramp as the piece moves, so it starts out with very low chance of the effect hitting and very little variation in the effect. By the end of the piece, the effect is turning itself on 80% of the time, and changing wildly.

Here’s a basic idea of the effect’s sound, with the input material muted (thus making this the tape part):

I recorded this four separate times, so that there are constantly changing repeated beats. Then I panned those to four positions, and filtered them so each sounds a little different. The effect is one I’m completely stoked on, and I can’t wait to hear HOCKET play this thing in November. Next step: recording the synth part on my Microbrute.

Posted in Works in Progress
Scroll To Top
Loading Comments...