I finally bought a new amp. And I think the process of doing so acts as a strange allegory to my recent thoughts about writing for orchestra.

To begin, the amp that I have played with for the last four or five years has been a Peavey 6505+ half stack. For those of you that don’t know, a half stack is an amp that consists of a head unit (the head, which is really the amp) and a 4 x 12 speaker cabinet (four twelve inch speakers), or the cab. Here’s the last photo of my 6505+, in my apartment just before taking it to the great amp shop in the sky: 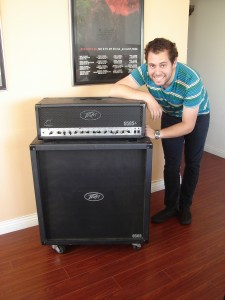 To put it bluntly, this is a really nice amp for a certain type of sound (metal), and it absolutely screams. It’s a monster, and I love it, and I will never say a bad word about its sound (for metal). There were, however, a few downsides to having this amp.

1. I’ve never been able to turn the volume above 3 at a show (or anywhere, actually), or else you literally can’t tell that anyone else is playing.

2. It’s a nightmare to move (my previous half stack was behind my choice to buy a truck in high school). It weighs over 100 pounds, is really really large, and I live on the top story of a building without an elevator.

3. It’s not versatile. As I’ve already mentioned, it’s great for metal, but what if I want to play something mellow? Or with a warmer tone? Pedals are great, but I don’t want an amp that needs to be augmented to get the sound I want out of it. And I don’t really play much metal anymore.

4. It’s idiotic. I don’t play arenas. Most venues my band plays these days tend to mic all of the amps, so that they don’t actually have to be loud (and actually shouldn’t be, so that they don’t interfere with the sound guy’s mix). Anywhere big enough to require this kind of volume will DEFINITELY have the equipment to mic all of the amps. Anywhere small enough to not mic amps simply won’t require a massive wall of speakers to fill the room with sound.

5. The amount of power causes the tone quality to suffer. To get the nice overdrive you get from putting too much power through your amp’s tubes, you have to turn an amp this powerful up to ear splitting volumes. With a low power amp, you can get the overdrive by pushing the tubes hard without actually getting much louder. Plus with the way decibels and power levels work, you’d be surprised just how loud you can get a low wattage amp. My new amp is 15 watts, switchable to 7. The old amp was 120. The difference in overall output, when they’re up at full volume, isn’t anywhere near double, and you could never get the old one up to full power anyway, for reasons already mentioned. Plus for 15 watts, the new one can definitely do some auditory damage. It’s a little monster.

Actually, it’s an Orange Tiny Terror combo with a 70th Anniversary Celestion Vintage 30 speaker in it. Here’s a picture of it in my studio: 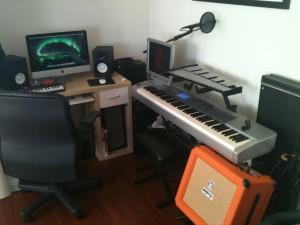 This amp sounds absolutely great for just about everything. It can be super gainy to handle most heavy rock, but the clean settings are absolutely beautiful. And the inbetweens are very very versatile. I can move it without a truck. It can still fill up most venues. It can get that “tubes are about to blow” crazy overdrive sound at low volume, so I can play with great tone in my apartment. I think the decision to switch, ultimately, is one of pure pragmatism, and nothing more.

I’m a little emotional though. Guitarists build connections with their amps. I knew the exact spot on the presence knob that I liked for the bridge pickup on my Tele, where it would really start growling but still have a lot of definition for things like open chords. And, having grown up playing something with a punk ethos, I was damn proud to carry that thing up and down three flights of stairs and nearly throw out my back just to play a short set to an empty bar. I’m going to miss it a lot, and if I come into the means and opportunity to purchase it again, I don’t doubt that I would. Plus I’m not all that manly, so those moments in which I get to stand in front of a wall of speakers and melt people’s faces are really special. Also, I can change my truck’s oil and tie knots.

So how does this relate to my thoughts on writing for orchestra? If you haven’t put it together yet, the old amp is the orchestra, the new one is the variety of chamber and electronic ensembles that abound these days. I pretty much already said this in my master’s thesis, but basically, writing for orchestra is impractical. Orchestras are driven in many cases by donors and keeping their audiences happy, and running them is a financially losing battle. As such, they aren’t going to play your music if no one knows who you are. So why spend all day writing for them and slaving over every detail of a score for a piece that MIGHT get played once, to an audience that wants to hear Mozart? Instead, why not put the same musical energy into pieces that you can get played and recorded? Smaller ensembles make it easier to put on shows, for whatever your audience may be. It can also mean that you can get some friends together to play, as opposed to convincing a board of directors to approve someone’s artistic plan for two years from now.

At the same time, my paragraph about being nostalgic about my amp applies here too, as does being pragmatic. If my band gets to play arenas, I will buy a stupidly large amp. If I get to write for a 300 piece orchestra, I will be on that like I am usually on any mention of chocolate or double IPAs. I love the sound of an orchestra, and if I get the chance to write something for one that will be performed and recorded, I will jump on it. I just don’t think it’s a good use of my current energy. Putting that energy into music which can get played (and then perhaps noticed by people who can commission works for orchestra) seems like a much more pragmatic use of my time.

That nostalgia and love, however, comes from the connection I have with orchestral music that has been nurtured by my study of and experience with it. Most people don’t have that connection. If our concern, in the Germanic tradition, is with the materials of music (pitch and rhythm), then the orchestration barely matters, and to greater affect our listeners we should write with colors that are up to speed with all of the color that is available to us today as composers. If our interest is in timbre and color…well why limit ourselves to instruments that were invented god knows when? Why limit ourselves to anything, actually? With electronics and amplification combined with acoustic instruments and the fact that we have real people to perform, it’s an amazing time to be engaged in this endeavor.

I’m rambling now, and I think you probably get the point. If not, you should retake your courses in reading comprehension. Anyway, this is a blog, not a carefully argued exercise in academicizing my concurrently opposed attraction to/motion away from unnecessarily loud speakers. For what it’s worth, though, my new little amp can still melt your face.