My friend Nadia Shpachenko, a pianist who plays around the LA scene a TON, asked to see some of my pieces a while back. Among what I sent her was my very short piece from 2009, Piano Piece for Mr. Carter’s 100th Birthday. I wrote it after attending Elliott Carter’s 100th birthday concert in London, and it was loosely inspired by watching Pierre-Laurent Aimard play Carter’s piece Caténaires. Here’s a recording of that:

Anyway! When she saw it, Nadia said she’d been working on an album project called Quotations & Homages that was all about composers responding to other composers, and she asked if she could include the piece. Her playing is killer, so of course I said yes.

That album comes out on April 6th on Reference Recordings, and you can pre-order it now at referencerecordings.com/recording/quotations-homages. It was produced by winner-of-grammys Elaine Martone. I’m in good company on it, as it’s also got pieces by Missy Mazzoli, Daniel Felsenfeld, James Matheson, Tom Flaherty, Vera Ivanova, Adam Borecki, and Peter Yates. I’m particularly taken with Missy’s piece Bolts of Loving Thunder, and Nadia’s performance of it is superb. Here’s a photo of Nadia and me at the recording session, which was kind of funny, in that I drove an hour each way to record a 9 second piece of music: 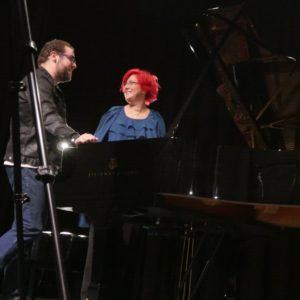 Once it comes out I’ll update this post with iTunes/Spotify/etc. links!